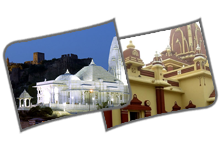 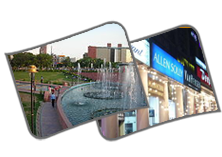 One of Delhi's most popular shopping and business centres, was built in 1931.It comprises of two concentric circles with colonial style buildings surrounded by a park. These buildings can be reached through the inner, middle and the outer circles.here. Gulmohur trees, a large fountain, ornate fencing and the recently added light post grace the central park. 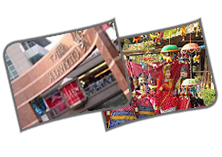 Dilli Haat in New Delhi is a food and crafts bazaar, opposite INA Market, is a one-stop shopping place for tourists coming to India. Dilli Haat in India, not only offers various arts and handicrafts of India, but also a taste of the ethnic cuisine. Visitors can also witness the different performing arts of the country. 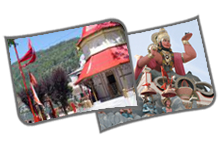 This samll but elegant temple located at Baba Kharak Singh Marg near Connaught Place was built in 1724. It is very popular among the devotees of Lord Hanuman. The 24-hour chanting of the mantra 'Sri Ram, Jai Ram, Jai Jai Ram', since August 1, 1964, has earned a place in the Guinness Book of Records 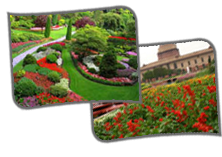 The famous Mughal Gardens is located in the premises of the Rashtrapati Bhavan in New Delhi - the official residence of the President of India. The building and gardens designed by Sir Edwin Lutyens occupy an area of about 320 acres that include colourful flowering shrubs and European flowerbeds. 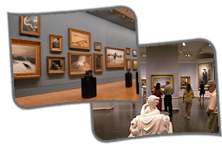 National Gallery of Modern Art Located in Jaipur House, near India Gate, this gallery was originally the palace of the Maharaja of Jaipur. There are over 15,000 paintings, sculptures and graphics which are exhibited from time to time. The works of modern Indian artists like Gagaendranath Tagore. 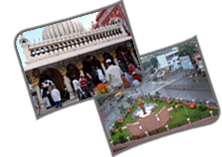 This is the tomb of the famous Sufi saint in New Delhi, Nizam-ud-din Auliya and after his burial it became the coveted cemetry of Muslim nobility. The tomb of Jahanara, daughter of Emperor Shah Jehan and well known poets, Mirza Ghalib and Amir Khusru are located here. This shrine is now an important Muslim pilgrim centre. 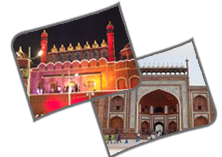 The Red Fort, with a circumference of over 2.2 kilometers, was built by the banks of the river, Yamuna in the 17th century. The fort is a delight to one's imagination. Imagine the Naqqar Khana (Drum room) also called Naubat Khana (Welcome Room), where once drums loudly heralded the arrival of the emperor and the Diwan-e-Am (Hall of Public Audience) resounded with the incantations of the people. Amazing, isn't it? There's more to see - Mumtaz Mahal. 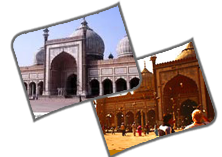 Built by Shah Jahan in 1658, it is one of the largest mosques in India with a seating capacity of more than 20,000. The mosque is situated near the Red Fort in old Delhi. This is the area that still retains the traditional charm of markets in Mughal times. The bulbous domes and tapering minarets built with marble stand strong and beautiful even to this day. This mosque has three gateways, four angle towers and two 40 m. 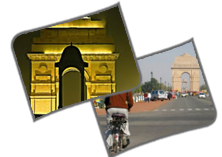 India Gate in Delhi was formerly known as the All India War Memorial, this solemn monument was built in 1931 in the memory of the Indian soldiers who died in World War I. Names of 13,516 soldiers are inscribed on its walls. Later in 1971, an eternal flame was lit here in memory of the unknown soldiers who died in the 1971 Indo-Pakistan war. India Gate stands at the end of Rajpath, and is a popular picnic site especially during the hot summer evening. 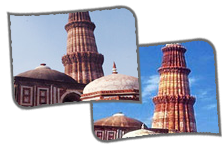 The highest stone tower in Delhi India, the Qutub Minar was built by Qutb-ud-din Aibak, the Viceroy of Mohammed Ghori in 1192. It was built to celebrate Ghori's victory over the Rajputs. The Minar is a five-storey building with a height of 72.5 metres. The first storey of the Qutb Minar was completed in the lifetime of Qutb-ud-din. His son-in-law and successor, Iltumush, added the next three storeys. 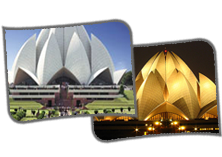 The temple represents the Bahai faith which is broad in its outlook, scientific in the influence it exerts on the hearts and minds of men. It signifies the purity and the universality of the lord and equality of all religions. Visited by over four million people, annually, this gleaming lotus- like marble structure is located on Bahapur Hills (South Delhi) and it is the seventh and most recent Bahai houses of worship in the world.. 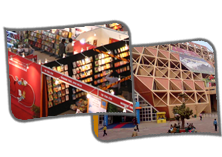 Located on Mathura Road, next to Purana Qila, this 149 acres of extensive ground, is rated as the finest exhibition complex in Asia.Besides the 15 giant exhibition halls, there is 10,000 square metres of open area for trade related exhibitions.The complex has various interesting sites like the National Science Centre, Hall of Nations, the unique Crafts Museum and the States Pavillion. The Nehru Pavillion, Atomic Energy and Defence Pavillion are also of considerable interest. 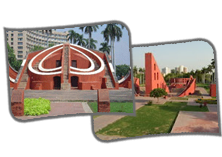 An Ancient monument of historical importance, Jantar Mantar was created to be used as a natural clock. Using the sunrays, it ssdisplays the time of the day very accurately. A marvelous evidence of ancient science.

Warning: mysqli_query() expects parameter 1 to be mysqli, boolean given in /home/hotelthe/public_html/sidebar.php on line 8